This, in essence, is the situation many Amazon customers find themselves in as Amazon begins automatically enabling Sidewalk on devices like Amazon Echo.

First announced in the fall of 2019, Sidewalk is Amazon’s program to solve the critical connectivity problem for small Internet of Things (IoT) devices, such as Tile trackers or Internet-enabled pet tracking collars. For devices like these to work, they need to be always, or nearly always, connected to the Internet.

Sidewalk is Amazon’s solution: it aims to provide a wireless infrastructure for these devices by turning Amazon devices like the Echo into connection points that any Sidewalk-enabled device can use.

The naming is appropriate: sidewalks are often built by allocating a slice of private property for the public good. Amazon Sidewalk (kind of) does the same thing, although in this case, it’s only for customers of Amazon and Sidewalk-enabled device makers.

On a technical level, Sidewalk is an innovative solution to a significant problem that stands in the way of the vision of always-connected small, mobile IoT devices. But there’s more to this than just a technical solution.

Amazon Sidewalk is built around the idea of taking a customer’s private wireless infrastructure and Internet connections and allocating a portion of it for (semi-) public use. As Amazon notes in this blog post, the public channel is encrypted and capped to segregate it from the rest of the customer’s traffic and minimize disruption.

Amazon is not the first to come up with this idea. A quick look at history shows that Amazon Sidewalk is following a path forged by Comcast in 2014 with its “xfinitywifi” offering.

How Comcast Made Xfinitywifi the Biggest Wifi Network In America

The catch, and there’s a big one, is that when Comcast introduced this feature in 2014, they implemented it with what I’m calling a “forced opt-in” model, which they continue to use to this day. “Forced opt-in” differs from traditional “opt-out” by not asking if you want to “opt-in” or “opt-out” but instead automatically opting you in and forcing you to take actual steps to “opt-out” later.

When it was rolled out in 2014, if you were a Comcast Xfinity customer who leased a router, you were automatically “enrolled” in this program. In other words, you would wake up one day to find that Comcast had enabled a new, public wifi SSID channel on your router that others could use possibly without even realizing it.

Even today, if you are a new customer or lease a new router from Comcast Xfinity, this feature is enabled by default. Then and now, if you don’t want to be a part of the program, you have to take steps to disable it manually yourself (steps to do this are located here).

If Bezos and Amazon are taking this risk, it’s clear that it’s because they see IoT connectivity as the key blocker to the next big thing.

Comcast was, and remains, very low-key about how this program affects customers’ routers. You can easily find information about how to use xfinitywifi for wireless access, but it’s harder to come by information telling you that you’re letting others use your router if you don’t make a change.

It’s reminiscent of an exchange from Douglas Adams’ “The Hitchhiker’s Guide to the Galaxy,” in which Arthur Dent is told that plans “have been available in the local planning office for the last nine months.” Dent replies, “You hadn’t exactly gone out of your way to call attention to them, had you? I mean, like actually telling anybody or anything….I eventually had to go down to the cellar to find them…[w]ith a flashlight…[i]t was on display in the bottom of a locked filing cabinet stuck in a disused lavatory with a sign on the door saying ‘Beware of the Leopard.’ ”

When xfinitywifi was rolled out in 2014 there was little press and surprisingly little outcry, possibly because the implementation was kept very low-key with little information provided. There was a single lawsuit, filed in December 2014 seeking class-action status by two Comcast customers in San Francisco. But in March 2015, it was forced into arbitration by a judge and its final disposition is unclear.

There has been no other legal action, regulatory action, or even notable outcry around xfinitywifi since. It is still in use today and Comcast boasts that Xfinity Wifi, the broader program that relies on xfinitywifi, is the largest wifi network in the United States. This fact almost certainly results from automatically “enrolling” Xfinity customers in it with very little notice and consent. By making participation as close to mandatory as possible, Comcast solved the problem of roaming wireless broadband Internet access for its customers.

How Amazon is (and isn’t) Following Comcast’s Lead

Amazon’s technical solution closely mirrors Comcast’s. But the way Amazon is implementing it is different, by being more transparent in providing notice, if not obtaining actual, clear consent.

Amazon Echo customers recently received an email like the one below announcing the upcoming Sidewalk rollout. 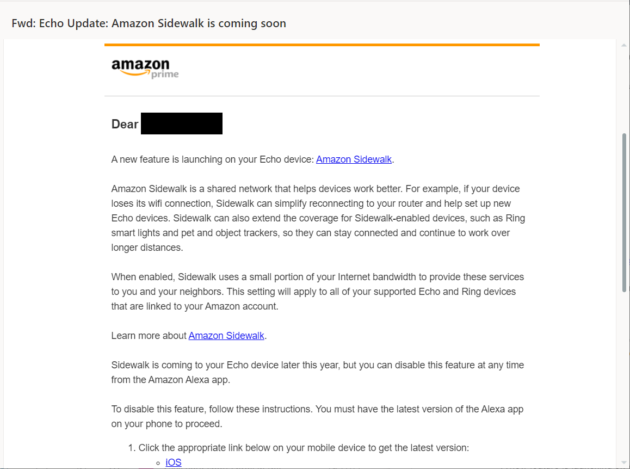 In the fourth paragraph, Amazon shows it’s following the same path as Comcast in using an identical “forced opt-in” model.

The message itself is different from Comcast’s rollout. Comcast didn’t (and still doesn’t) provide information that is as clear and focused as Amazon’s message. In addition, Amazon’s message presents the steps that the recipient can take to disable this feature if desired, rather than leaving it to the customer to find on a support website.

Another step Amazon has taken, in the interest of transparency, is releasing a white paper going into more technical details about Sidewalk, including discussions of security and privacy protections. Again, there is nothing like this from Comcast even after six years.

While Amazon is following Comcast’s lead with the “forced opt-in” model, their handling shows that they clearly recognize there are significant risks with this approach around clarity of notice, privacy concerns, and the ability to, if not opt-out, at least turn off the feature.

Indeed, the email itself tips us off that they’re aware of these concerns because they use the classic “s**t sandwich” tactic for delivering bad or unwanted news by first highlighting the benefits, then delivering the bad or unwelcome news that it’s automatically enabled and requires steps to disable. Amazon using this formula is a clue that they can see the potential for people to take this information badly and want to minimize its potential negative impact.

What is Amazon thinking?

Looking at Amazon’s rollout of Sidewalk against Comcast’s rollout of xfinitywifi, we can make a supposition about why they’re doing this.

The first and most important lesson is that “forced opt-in” roll-outs are effective. People may not like this approach but the reality is that Comcast used it successfully to build xfinitywifi into a major and effective offering without suffering any penalties. This has shown there is clearly little risk and major rewards for this approach.

That said though, Amazon’s approach shows they understand that they face greater risks in this endeavor than Comcast did. The risks for Amazon differ in part due to their experience with security and privacy concerns around Ring in the past year but also their market position and the level of scrutiny, including antitrust concerns, they’re facing.

Even with those greater risks, it’s clear that Bezos and Amazon view the risks as worth the reward, especially if they take steps to actively mitigate those risks like they’re doing.

Why? A September 2019 article in GeekWire quotes Bezos saying “People don’t even realize yet how important that intermediate-range [Internet connectivity] is going to be.” This is precisely the problem Sidewalk is aiming to solve.

Throughout his career, Bezos has shown a talent similar to Henry Ford for recognizing and targeting crucial dependencies that can block his broader vision. For example, Ford saw that people needed to be able to pay for cars and so gave his workers wages that could lift others and create the market his cars needed. For IoT devices to sell, they have to work, and to work, Amazon needs to solve this crucial connectivity problem. If Bezos and Amazon are taking this risk, it’s clear that it’s because they see IoT connectivity as the key blocker to the “next big thing.”

What Can We Take From This?

If the Comcast xfinitywifi offering is any indicator, Amazon Sidewalk will likely be a large success, solving connectivity for IoT devices. It may face some headwinds from privacy and customer advocates, but the steps they’ve already taken are reasonable and likely effective ones to meet more serious objections.

Perhaps most importantly, unless or until there are legal and regulatory changes, the reality is that we can expect to see more of these “forced opt-in” programs, especially where success or failure is contingent on getting large numbers of participants.

Privacy advocates can and should rightly question if this emerging model of “forced opt-in” with notice is sufficient to protect our rights and privacy. But these should be balanced against other questions that the Comcast xfinitywifi and emerging Amazon Sidewalk offerings raise.

Some of today’s most promising technology requires constant connectivity. In light of that reality, does allocating personal connectivity for some kind of collective good make sense, even if it’s only fellow customers? Also, we know that explicit “opt-in” programs inherently depress acceptance and adoption: using that for a program of shared connectivity simply won’t be as successful as a “forced opt-in” model like we’ve seen.

In other words, programs that follow the best privacy models may be the least effective, while those that are the most effective may have the worst privacy.

For now, the best thing we can do is be aware of what’s happening, keep an eye on emerging trends, make informed decisions for ourselves on whether the benefits are worth the costs, and go to the trouble to opt-out if we decide that makes sense.

For myself, I’m not a Comcast customer and so don’t have to deal with the xfinitywifi question. But I was once and I did turn it off. And I’m not an Amazon Echo customer so I don’t have to face this question either.

But I do believe that “forced opt-in” has become a de facto standard in this country and so plan to continue to aggressively be on the lookout for where this will next occur, how it might affect me and so require action. And that is the key takeaway for all of us: we have to look out and take actions for ourselves, because no one else will do it for us. How we achieved write speeds of 1.4 million rows per second

Twitter is finally rolling out auto-captions for voice tweets

TV Host Amber Mac: 'It's Not About Innovation, It's About Adaptation'