The world number one, who has won all eight of his previous Melbourne finals, is aiming for an 18th major title.

Djokovic trails Rafael Nadal and Roger Federer, who have 20 each, in the fight to finish with the most men’s Slams.

“He has more experience but more things to lose than me,” said Medvedev.

“I don’t have a lot of pressure because Novak has never lost here in the final. He has all the pressure to get to Roger and Rafa.

“But I think he’s the favourite because he hasn’t lost here.”

Fourth seed Medvedev, 25, will contest his second major final after losing to Spain’s Nadal in an enthralling 2019 US Open final.

After falling short of making an epic comeback in New York, Medvedev has another opportunity to become Russia’s first male major champion since 2005.

Medvedev is in the form of his life, having earned his 20th match win in a row by beating fifth seed Stefanos Tsitsipas in Friday’s semi-final.

Djokovic ready for the ‘battle of the tournament’

If 33-year-old Djokovic is to win his 18th major, he says he will have to solve the puzzles set by “master chess player” Medvedev.

“I’m ready for the battle for the toughest match of the tournament, without a doubt,” said the Serb.

“Medvedev is playing at an extremely high quality. He’s the man to beat.

“I heard Jim Courier calling him a master chess player because of the way he tactically positions himself on the court, and it’s true. You know, he’s definitely a very smart tennis player.”

Djokovic struggled with an abdominal injury earlier in the tournament, saying it would have forced him to withdraw from any event outside of the majors.

But he has recovered and said he suffered no pain in his semi-final win against Russian qualifier Aslan Karatsev.

On Saturday, Djokovic practised before a match for the first time since his third-round win over American Taylor Fritz when the problem flared up. 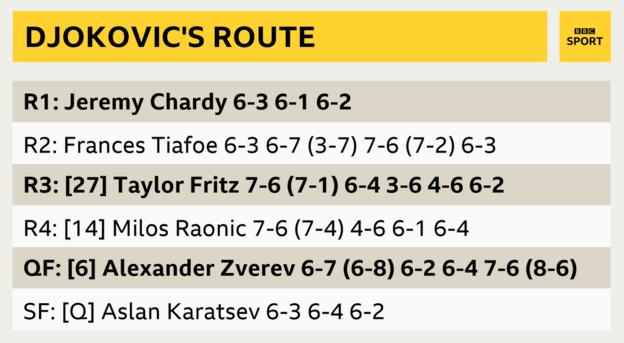 Djokovic looking to extend dominance at his ‘second home’

Few players have dominated a Grand Slam tournament in the Open era like Djokovic’s takeover of the Australian Open.

Nadal is the only man to have won more majors at the same place, claiming 13 titles at the French Open, with another win for Djokovic on Sunday moving him ahead of Federer’s eight Wimbledon crowns.

Djokovic describes Melbourne Park as his “second home” and the statistics starkly illustrate his dominance there:

While he has already created history in Melbourne, Djokovic has made no secret that he wishes to overhaul Federer and Nadal in the race to finish with the most men’s Grand Slam titles.

For many, that is the key indicator to determine who is the greatest men’s player in the history of the sport.

Medvedev plans to turn US Open defeat into positive experience

Since losing in the Vienna quarter-finals in October, Medvedev has won the Paris Masters and ATP Finals title, as well helping Russia win the ATP Cup earlier this month.

Not only is he simply winning matches, he is beating the best. Against Djokovic he is looking to earn a 13th successive win against an opponent ranked inside the top 10.

Medvedev has won three of his past four meetings with Djokovic but facing the Serb with the weight of winning a first major title should be a different proposition.

On what he has learned from losing to Nadal in New York, Medvedev said: “I took a lot of experience. It was my first Grand Slam final against one of the greatest and on Sunday I will face one of the other greatest.

“The experience from the last Grand Slam final is going to be a big key, to not get tight and to just play again.” 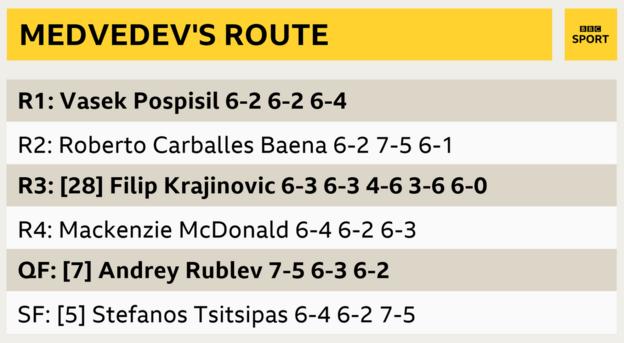 What they say about each other

Djokovic on Medvedev: “He has a big serve. For a tall guy, he moves extremely well. Forehand maybe was his weaker shot, but he has improved that as well. Backhand is as good as it gets.

“He’s so solid. He doesn’t give you much. But he’s not afraid nowadays to attack and get to the net and take it to his opponents.” 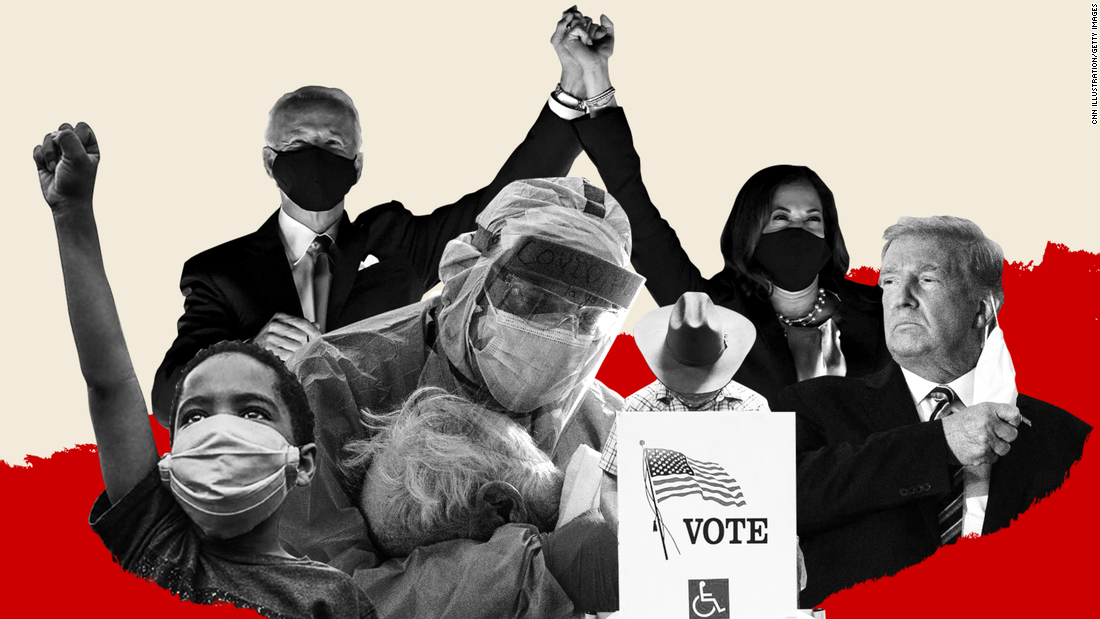