Company background: GeekWire initially spotted Spot back in June when it was in stealth mode. The 7-person startup is building software that creates a virtual representation of an office. Spot CEO Gordon Hempton compared it to “The Sims for the Enterprise.”

Hundreds of virtual worlds have been created with Spot for events and/or a virtual headquarters. The software is still in a closed beta. “In the future, we plan on creating a true digital world that connects teams to each other both inside and outside of their organizations,” Hempton said. 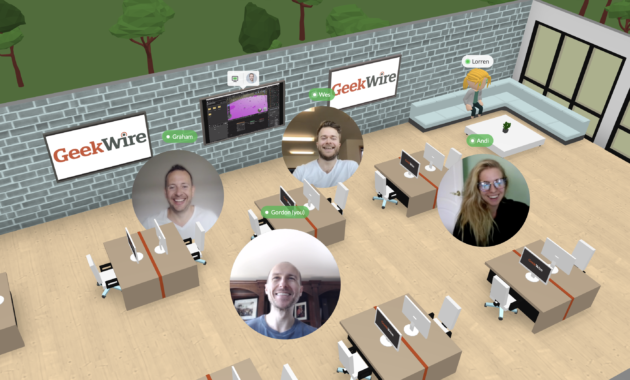 Tailwinds: The pandemic-driven shift to remote work is driving adoption of virtual work tools — everything from video conferencing to collaboration software. Spot competes with startups such as virtual office space platforms Gather, which just raised $26 million, and Teamflow, which just raised $11 million. There are also a bevy of others such as Virbela and Branch that sell similar virtual HQ software.

Some companies including Amazon want to get workers fully back in the office but many — such as Zillow Group and Microsoft — are rolling out hybrid workplaces or distributed workforce models. That’s good news for startups such as Spot.

Founders: Hempton left Outreach in October 2019, while his co-founder Wes Hather departed in 2020. They helped launch the Seattle unicorn startup seven years ago with Andrew Kinzer and Manny Medina. Kinzer left in March 2020 and Medina remains CEO of Outreach, which sells sales automation software and raised a $50 million round in June. Medina told GeekWire previously that his co-founders left on good terms. Why printk() is so complicated (and how to fix it) [LWN.net] Why Music is Helpful for Concentration