More than a year after shutting down his popular Korean-Mexican food truck and catering business Bomba Fusion, Seattle entrepreneur Simon Yu checked in from Mexico, where he’s working remotely, and the subject turned to food.

“I had tacos here yesterday. I love Mexican food,” Yu said. “I still think our tacos are really good. The combination of Mexican and Korean food — it just goes so well together.”

Yu may be done making tacos for tech workers in Seattle, but he’s plenty busy cooking up another success story with his current startup, StormX, a cryptocurrency platform he co-founded in 2015. And he’s still feasting on the lessons of persistence he learned along the way while struggling to make ends meet as a University of Washington student.

Earlier this month, Yu and StormX landed a coveted sponsorship deal with the Portland Trail Blazers, the NBA team he grew up rooting for. We caught up to learn more about Yu’s startup journey.

From being broke to dropping out of college and starting a Korean taco truck to being part of a $200 million+ company and sponsoring my favorite basketball team..

What a wild ten years it has been.

Yu grew up near Portland in Lake Oswego, Ore. When he moved to Seattle to attend UW, his parents were still running a small frozen yogurt shop near Portland. But they ran into troubles and declared bankruptcy when Yu was a sophomore.

“I was paying out-of-state tuition,” Yu said. “And I told my dad, ‘There’s a lot of pressure right now. So I’m just going to drop out and just work and try to save enough money so I can go back to college.’”

My mom was proud that she got to feed half of the Seattle tech population from her recipe.

He ended up working as a bank teller, but the barely-minimum-wage job wasn’t enough to pay for rent, student loans, food, etc. For months he was eating peanut butter and jelly sandwiches.

“It was either find a second job or try to start a business of my own,” Yu said. “I wanted to sell these Korean tacos to kids around campus, to make some side income.”

Using his mom’s Korean barbecue recipe, Yu assembled simple tacos in his apartment and sold them for $3 to students working late hours at UW’s Odegaard Library. Kickstarted by $100 he borrowed from his dad at age 19, and with no experience in the food industry, let alone starting his own business, Yu eventually turned the Bomba Fusion taco truck into a reality.

“I’m a quick learner. I think that’s the one thing that I learned from being an entrepreneur for 10 years,” Yu said. “We were just able to keep figuring out problems, finding better spots and the business started really picking up.”

Yu was still working in banking while running the truck around 2014, and he developed an interest in bitcoin. It was then that he met Calvin Hsieh, a UW computer science graduate who was also into the burgeoning cryptocurrency. Hsieh was looking for side work.

“He was working on a bitcoin application, just a simple consumer app that paid users like two tenths of a penny for watching a video ad,” Yu said. “He just wanted to do the startup full-time after college and he needed some money for living costs and so he applied to be the food truck manager.”

After about a year and half, Yu quit his banking job to focus on Bomba Fusion as the truck picked up, while also pouring money into the survival of CakeCodes, the bitcoin startup Hsieh founded and that Yu joined. Yu said it was tough to get funding in Seattle because “everyone thought bitcoin was money laundering or a drug smuggling kind of operation.”

The startup was bootstrapped for a few years, and Yu drove for Uber and Lyft as he worked to pay down his student loans. But by 2016 they were accepted into the 9Miles Labs startup accelerator, pitching CakeCodes on Demo Day as a gamified way to help businesses acquire new customers.

They landed angel funding toward the beginning of 2017 and as crypto picked up and the product was doing well, Yu said they ended up raising a ton of money toward the end of 2017.

At the same time, Hsieh went on to become manager, web developer and eventually co-owner of Bomba Fusion. And CakeCodes evolved into StormX.

StormX is primarily a cash back application, so whenever users shop from Nike or e-Bay or Adidas or any of the hundreds of stores that StormX offers, they earn cash back in the form of cryptocurrencies, which can be redeemed as bitcoin, Ethereum, or StormX’s own STMX tokens. Users can also do a couple of micro-tasks — play games or check out different apps — to earn money as well.

“Overall, what we’re trying to build at StormX is a single marketplace where people could just come and find different ways to earn money online,” Yu said. “And that really stems from Calvin and myself always desperately looking for ways to earn money through all these different jobs and stuff. We’re trying to create a simple platform where anyone anywhere across the world could just come and just use our app to earn some side income or primary income or whatever it may be.”

StormX has attracted a global audience in more than 150 countries. The app has more than 3 million downloads and has paid out more than $4 million in rewards to date. Total funding for the startup is now $38.7 million.

Yu called from Mexico recently because StormX has gone 100% remote. The startup used to have a big office in Seattle, employing 53 people, including contractors, at its height.

But they hit a crypto bear market in 2018-19 and Yu said they didn’t have a good product market fit.

“Our burn was just too high. We were always trying to compete with Amazon and Microsoft [for talent] and you had to pay a lot of money for developers and it just became too unsustainable for us to survive,” he said. “We had to do a massive downsize.”

StormX went to a skeleton crew and slimmed down to eight employees. But they’re coming back, finding smart people in Asia and Europe who don’t have a cost of living as high as Seattle’s, and the team has grown to 23.

“It’s worked really well for us,” Yu said of remote workers. “I think that the plan is to continue doing that.”

StormX landed its logo on an NBA jersey thanks in part to a tweet, where Yu proclaimed that one day his company would grab the coveted marketing spot. A StormX partner saw it and connected the startup founders to an NBA team.

After talking to a few teams, the Trail Blazers eventually reached out and the conversation changed.

“Their attitude was just completely different,” Yu said. “The organization all the way from the CEO to the sales reps, everyone was so into it.”

The company views the partnership with the team as a way to gain more mainstream exposure and show people that there’s more to cryptocurrency and blockchain beyond speculation and trading.

“There’s a lot of good use cases and we’re one of them,” Yu said. “Our product is here, we know how to turn the knobs. Now it’s time for us to really be aggressive with marketing. The Blazers was sort of our first partnership, but we have several more in the pipeline. We’re going to start making some buzz.”

Bomba Fusion was doing well when Yu handed over the operation to his parents so they could have a source of income. It pivoted mostly toward being a catering business, serving tech companies such as Amazon and Microsoft and others including Nordstrom and the Bill & Melinda Gates Foundation.

In March 2020, COVID-19 hit and companies didn’t need food for workers who weren’t in offices. And around the same time, Yu’s mother was diagnosed with a brain tumor and was unable to operate the business anymore. Yu told his parents they should just retire. His mother returned to Korea for successful brain surgery, and now he sends his parents money every month.

“We catered to 200 companies or something like that. It was very popular,” Yu said. “My mom was proud that she got to feed half of the Seattle tech population from her recipe.”

Yu said that having good advisors to talk to was a big help when starting a company in his 20s with little experience. Advisors who ran successful companies coached Yu and Hsieh through problems that might have seemed insurmountable.

He also credits the work ethic his parents always showed with guiding him on his own path. Whenever he and Hsieh were faced with financial hardship, they figured they’d seen worse and if they could eat they could survive.

“We just don’t take things for granted. We just keep going,” Yu said. “And that’s definitely one thing that’s really helped us separate from some of the other companies. We definitely went through a lot of hardship. There were definitely a lot of points in our career where we thought we wouldn’t make it.” 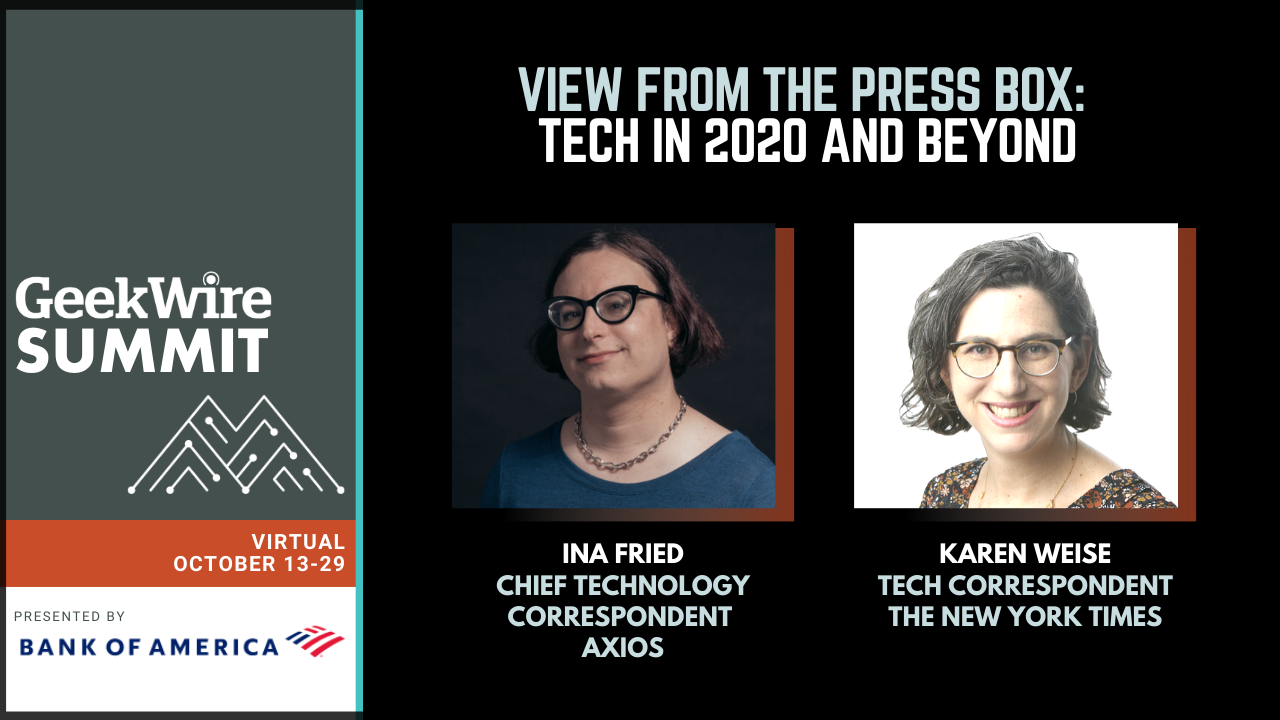 Tech in 2020 and beyond: The economy, Amazon, antitrust and the potential impact of the election