Thirty years ago this month Scientific American launched a new column called “Computer Recreations.” I wrote the first six installments, then passed the baton to A. K. Dewdney.

Soon after the first column appeared, we received a letter pointing out that the title “Computer Recreations” had already been used by the journal Software—Practice and Experience. I was embarrassed by this revelation, not because of any worries about legal conflicts but because I should have known what other publications were doing in the same genre. I went off to the library to look at some back issues of SP&E. Here’s what I found in Vol. 1, No. 1, published a dozen years earlier, in 1971:

Through the rest of 1971 and into 1972 there were half a dozen more “Computer Recreations” columns attributed to (aleph_0!), followed by a couple of guest columns (the first by Paul Bratley and Jean Millo of the University of Montreal, the second by Andrew Tanenbaum of the Vrije Universiteit in Amsterdam). After that, “Computer Recreations” disappeared from the pages of Software—Practice and Experience, never to be mentioned again.

Recently I had occasion to take a fresh look at the SP&E columns, and I realized that I have never learned the true identity of the mysterious (aleph_0!). Maybe one of my readers can help unmask the author. Or maybe the real Aleph Null will step forward now to take credit for his or her work. I’m also curious about a figure called Archimedes, who appears in several of the columns as a mentor or sidekick of (aleph_0!). In one column Archimedes is said to be “a group of mathematicians.”

For a while I thought that Aleph Null and Archimedes might have been members of the Bell Labs gang that was so lively and prolific in the late 60s and early 70s—Dennis Ritchie, Ken Thompson, Brian Kernighan, Doug McIlroy, Michael Lesk and others—the crew who gave us C and Unix and so much else. But that can’t be right. One of the SP&E columns discusses Darwin, a game in which programs compete for space and survival in a computer’s memory. (Dewdney later wrote about a similar system called Core War.) Darwin was invented at Bell Labs, but the SP&E column describes the program from an outsider’s perspective: (aleph_0!) and Archimedes talk to the Bell Labs group and then build their own implementation of the system. 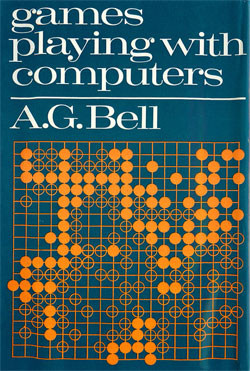 In addition to seven “Computer Recreations” columns, (aleph_0!) is also listed as the author of a 1973 book review in SP&E. The book under review is Games Playing with Computers, by A. G. Bell. For a few days this summer I entertained the notion that (aleph_0!) = A. G. Bell. The review of Bell’s book is rather harsh, but that didn’t dissuade me; after all, every author is his own worst critic. A glance at the book would surely settle the matter, I thought, but none of the libraries within easy reach of Boston could supply a copy. Eventually I bought one online (for $3.44, plus shipping). I’m afraid I found no support for my cute self-reviewing hypothesis. Stylistically, Aleph Null and A. G. Bell have nothing in common.

Software—Practice and Experience is a publication with British roots. The first editors were C. W. Barron of the University of Southampton and C. A. Lang of Cambridge. The journal’s Cambridge connections were particularly strong in those early days, with a board of editors that included Maurice V. Wilkes, who had headed the Cambridge Computer Laboratory since 1945. I now incline to the view that Aleph Null and Archimedes were part of this milieu—almost surely from Britain and probably from Cambridge. But I have made no further progress in identifying them.

If you would like to join in the guessing game, here are a few clues to consider, culled from the seven published (aleph_0!) columns:

Regrettably, the columns themselves are impounded behind a John Wiley paywall. Here are the topics:

1972 (2). “April Foolery.” Puzzles on topics such as algorithms for card shuffling.

Using another nifty technology called a library, I’ve looked at the book in which this entry appears (Analyzing Computer Security: A Threat/Vulnerability/Countermeasure Approach, by Charles P. Pfleeger and Shari Lawrence Pfleeger). There’s no hint in the book of how the Pfleegers know that Aleph Null = C. A. Lang, but I have no reason to doubt the identification.

With a little more sleuthing—it’s quite a marvel, this Google thing—I have learned that C. A. Lang is Charles Lang, who went on to a distinguished career in computer-aided design and three-dimensional modeling. From David E. Weisberg:

Charles Lang graduated from Cambridge University in 1960 with a degree in engineering. After several years at Mullard Research in England, Lang enrolled as a graduate student at MIT in 1963 and worked at Project MAC for more than 18 months with Doug Ross and Steven Coons. Lang was then recruited back to Cambridge University’s Computer laboratory by Professor Maurice Wilkes.

The British Government arranged funds and resources that underwrote the activities of the Cambridge CAD Group in 1965 — the group founded by Wilkes and headed by Lang until 1975. In 1969, the group started developing solid modeling software on a Digital PDP-7 system using assembly language programming. “Unfortunately no one told us it was impossible,” says Lang. “But then Ian Braid turned up.”

Now, what about this Archimedes bloke?

Update 2013-09-08: Shecky R solved the mystery and now Barry Cipra has unsolved it, with a 1971 document that includes the statement: “It should be noted that Aleph-Null and C. A. Lang are not the same person.” Ramp raises $300M at a $3.9B valuation, makes its first acquisition – TechCrunch